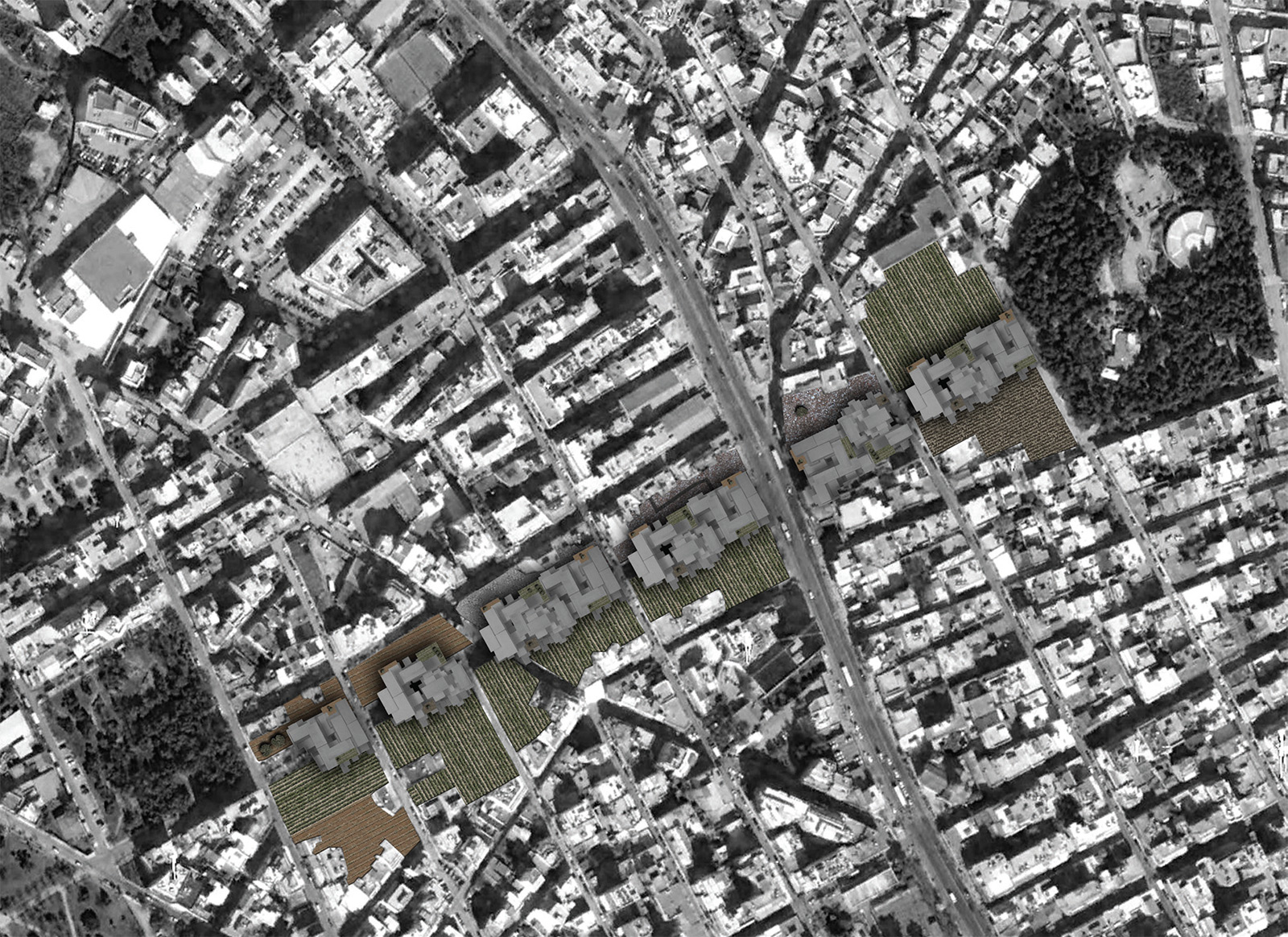 The pattern of the contemporary Athenian city in its highly homogenous form is based on the building block and the apartment building, known as polykatoikia (meaning ‘multi-house’). The type of polykatoikia was formed in the thirties and expanded in the fifties as an answer to the question of how to house the multiplying unit of the Greek family. The unit of the family becomes to be the ideological base of modern Greek state. It is also the productive unit of economy. The total anthropological condition of modernity changed in Athens in the last twenty years to the new condition of post-modernity where the notion of ‘people’, with a homogenous national identity, gives place to the multicultural notion of the ‘multitude’. The social unit of the Greek family is transformed to the multicultural monad of the ‘singularity’. The singularity can no more inhabit the apartment units of polykatoikia. The multicultural multitude of the contemporary city is raising the question of housing in new, unexpected terms.
In terms of the city materiality two factors emerge that need answers in the scale of the city. The first points on the fact that the city ground in Athens is covered by buildings in such a high density that the ratio of open space is 2,55 sq.m. per 1 inhabitant, the lowest ratio in Europe. The second is the crisis of the dominant type of the polykatoikia. Twenty five per cent of apartments remain closed or free at the same time when unnumbered foreign citizens, refugees and immigrants, lack house and labor. Simultaneously, the polykatoikia buildings get old, in an average age of nearly 60 years, when the quality of their construction doesn’t bear to exist more than 90 to 100 years.
There comes the time when the type of polykatoikia has to be radically reconsidered. The same happens in reference to the urban densities. Our proposal gives a paradigm for a radical way to reconsider the housing problem in Athens, without disturbing the urban tissue as it is. We propose a total change of building form in a set of twelve urban blocks that intervene between two archaeological sites in the center of Athens. Between the tiny Colonos Hill, where the mythic Oedipus emerged as Sophocles puts it, and the historic Plato’s Academy we transform the building form of the twelve blocks by keeping the amount of population constant. Three parameters change:
FREE GROUND The analogy of open space (free ground) to the built space. By doubling the height of the buildings and by bridging the existing roads, free space is left for urban gardening and archaeological excavation. The specific proposal, as model, raises the analogy of free space per inhabitants from 2,55 sq.m. per 1 inhabitant to 7sq.m. per 1 inhabitant.
SUSTENANCE OF POPULATION DENSITY New interior spaces are provided that are not apartments any more. Continuous open private spaces (lofts) are provided for multicultural singularities rather than for stable Greek families. The density of people per urban block doesn’t change from the existing situation. 350 inhabitants keep living in a block, meaning that one inhabitant consumes 7 sq.m. of ground for his leaving.
POROCITY The new urban structures, called ‘Multidomes’, which means dwellings for the multitude (in ancient Greek: dome, domos means dwelling) are structures that provide common spaces as independent levels of open space on the building. These levels are used as spaces for solar energy structures and gardening.
THE PILE The structure of ‘Multidomes’ in Athens emerge more as an assimilation of building matter than as an articulation of construction modules. The project is a metaphor overall. The singularities are the cement bricks. The singularities together constitute the multitude. The bricks together in unstructured -like- ruined domes, house the multitude. Unstructured, heavy, mobile, fragile, unstable, yet collective, expanding the fields of the common, the multidomes recall for an innovative approach to the new metropolitan living. 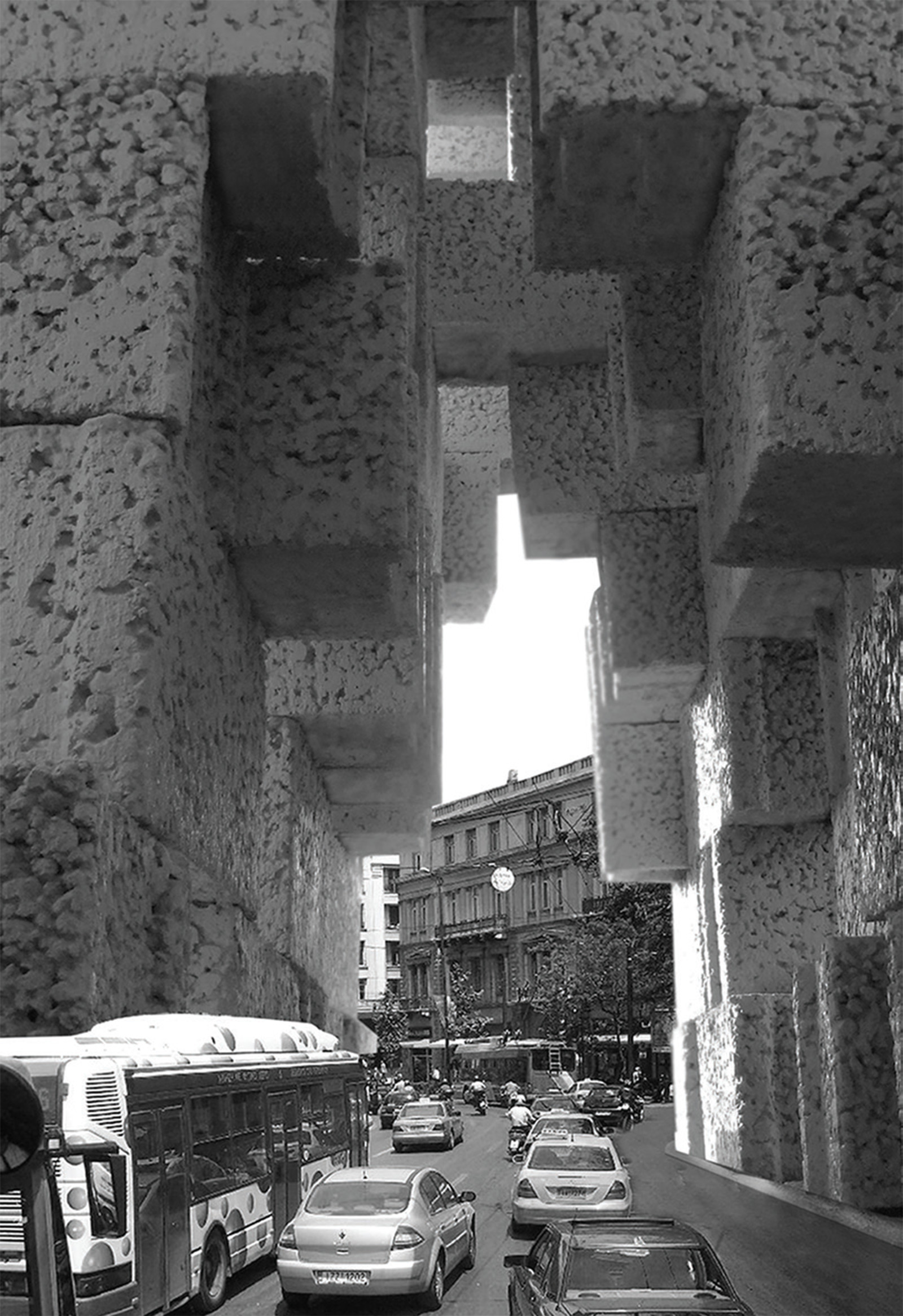 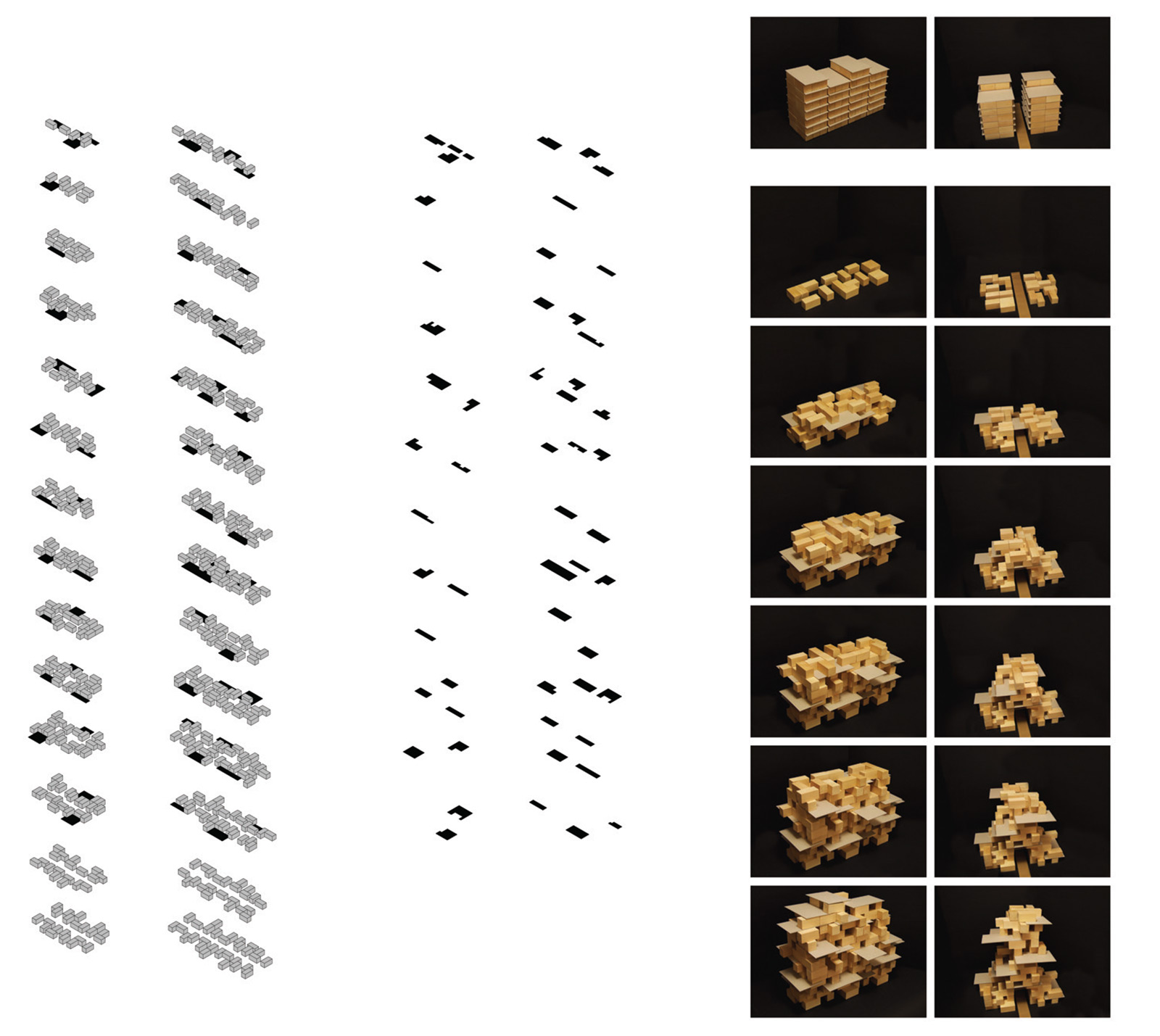 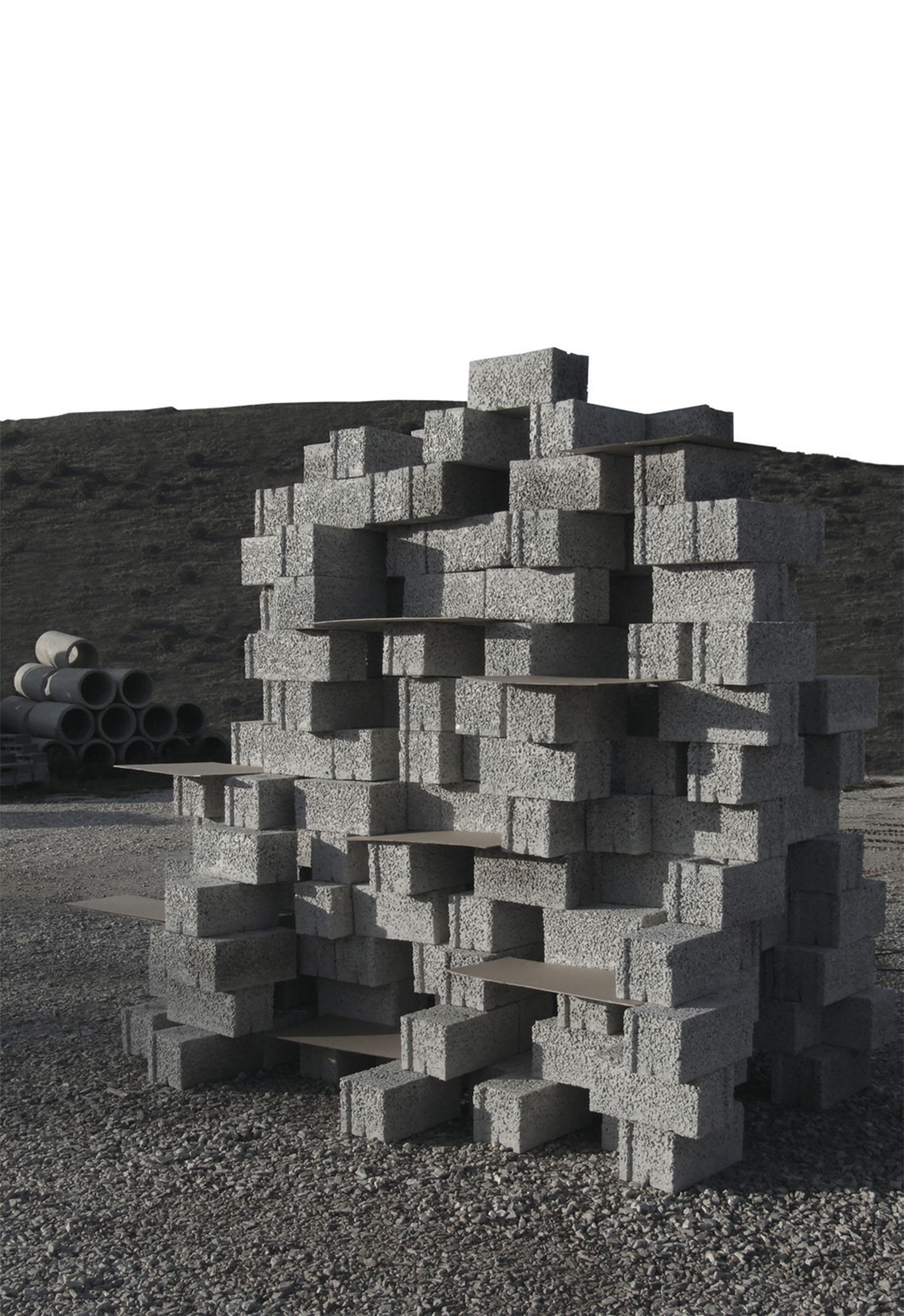 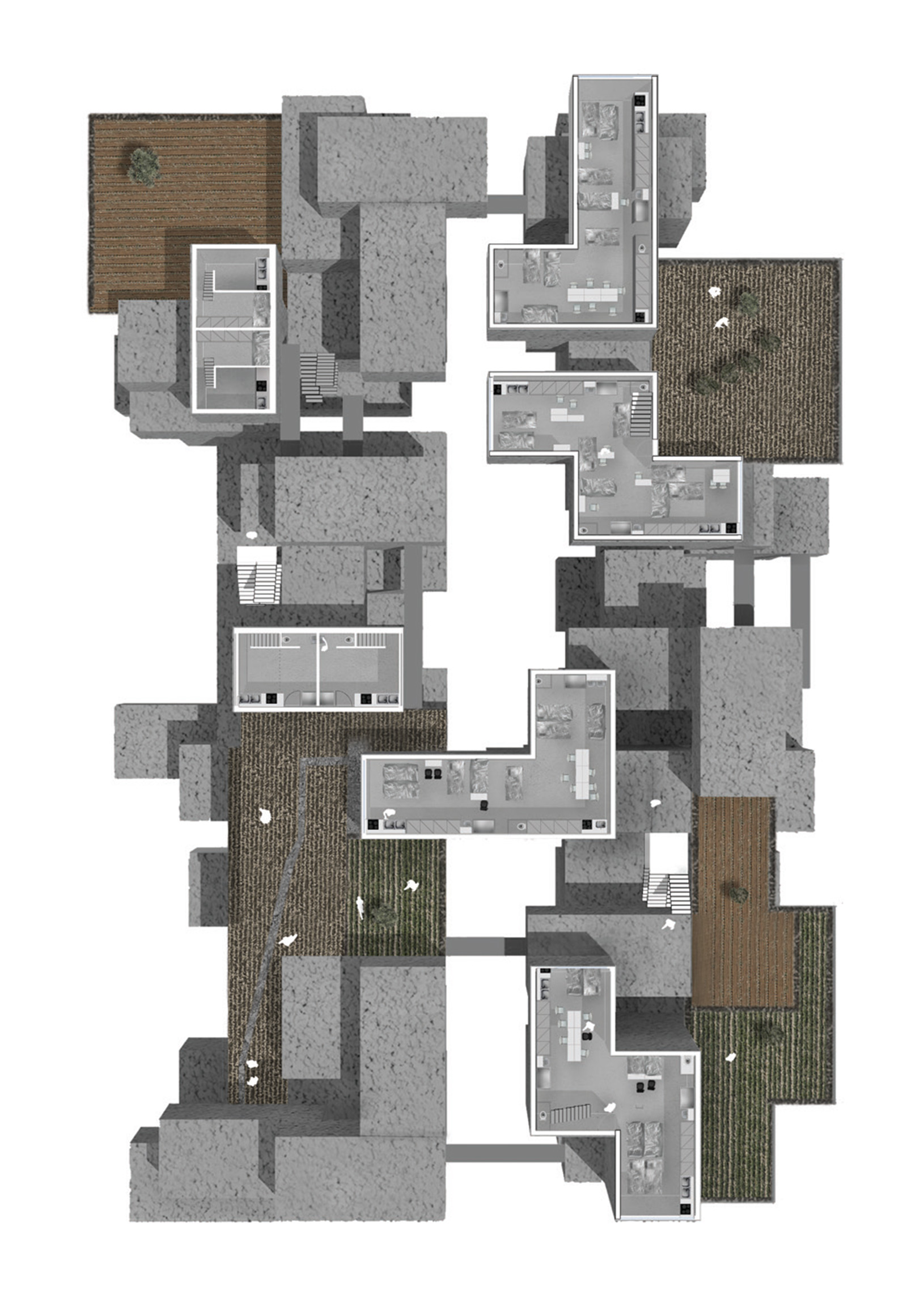 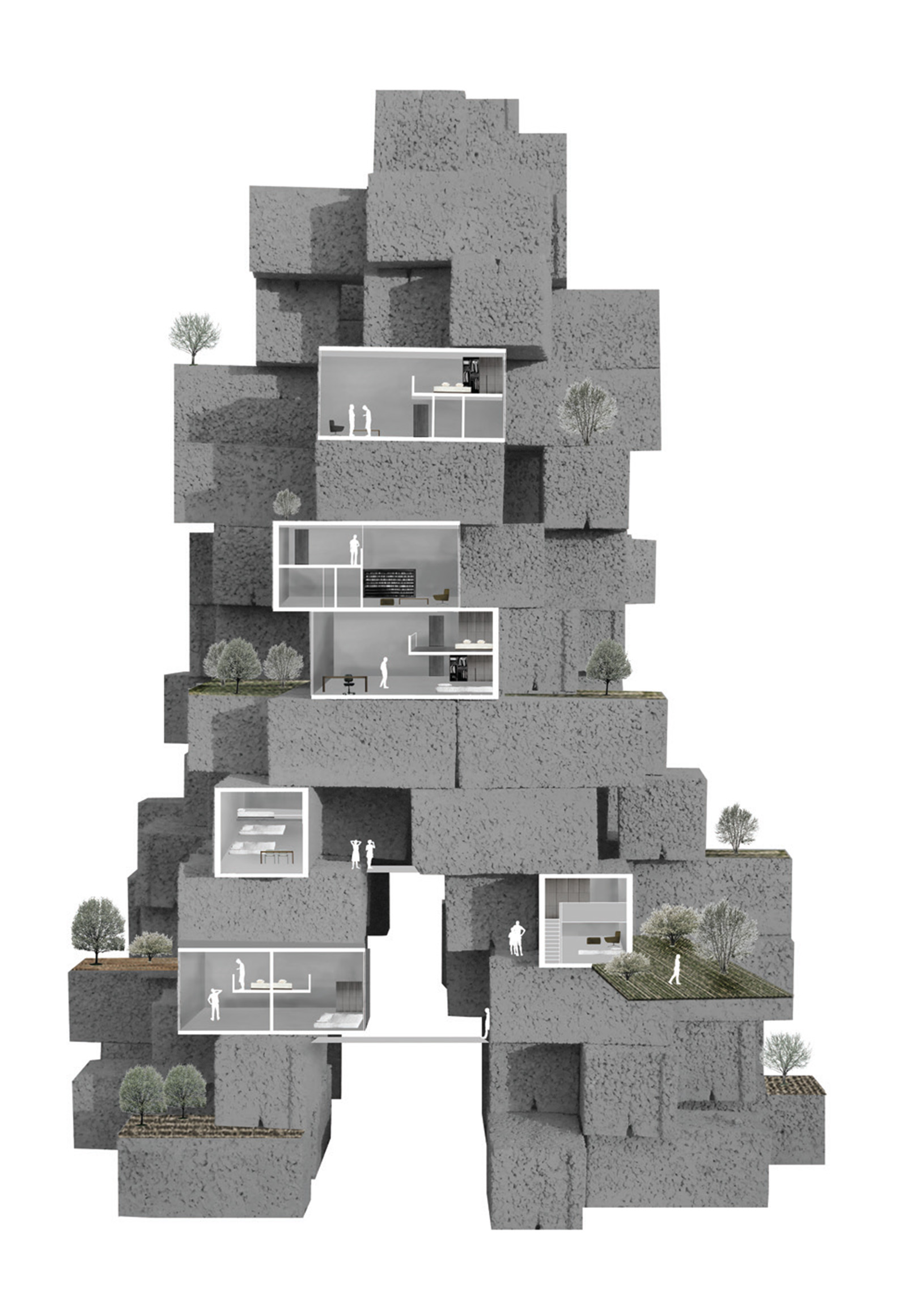